I found this item to be somewhat surprising.

DACT better known in the U.S. as "Aggressor" and "Top Gun".

Thanks to the Aviation Geek Club Internet web site for the article.

"Sixty-three warplanes a portion of which [appaently] will be used to create a smaller [but still significant] number of operational aircraft."

"Between 30 and 45 Mirage F1 fighters will be refurbished to fly again as adversaries against U.S. military aircraft"

Between 30 and 45 aircraft will be refurbished to fly again as adversaries against U.S. military aircraft. Warplanes retired from the French inventory still for some time in the future useful! 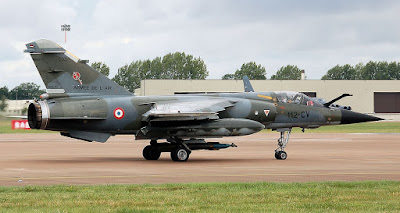 That cost of  $25 million USD works out to a cool $400,000 USD/warplane. A bargain. These planes will also retain some sort of on-call combat capability? That remains to be seen.

Furthermore, if and when that number of about forty-eight Mirage F1 able to take to the skies that number about equal to the entire Royal Air Force [British] air combat warplane inventory as is presently available!