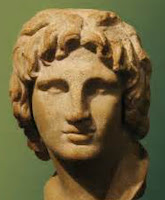 "War! What is it good for? Absolutely nothing!"

NOT in all cases 100 % so. Discovery of an ancient lost city from reconnaissance photographs as taken by either high-flying American "spy planes" or "spy" satellites.

From the Daily Mail online and the article by Phoebe Weston.

FIFTY YEARS LATER THE TRUTH IS TOLD! DECLASSIFIED AMERICAN RECONNAISSANCE IMAGES AS OBTAINED FROM EITHER HIGH-FLYING "SPY PLANES OR "SATELLITES" THE LOCATION OF A "LOST CITY" FOUND QUITE BY ACCIDENT!

Ask yourself also, how many similar discoveries are going to be eventually found, courtesy of military reconnaissance images as taken fifty years ago!!

Alexander the Great to you mere mortal!!