Thanks to the Russian controlled [?] media Russian Times:

"The unique Tu-134UBL plane, also known as the ‘Black Pearl,’ has returned to the air after undergoing repairs, with the comeback flight caught in spectacular footage."

"It was developed on the basis of the Tu-134 passenger jet in early 1990s to train pilots and navigators from Tu-160 and Tu-22M3 strategic nuclear-capable bombers. Around 90 such aircraft were produced between 1981 and 1984." 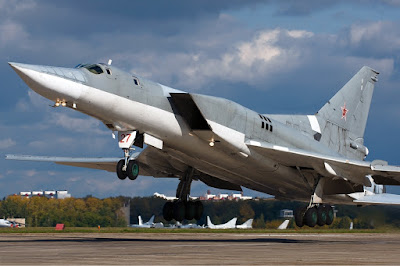 Commercial version Tu-134UBL modified to serve as a training aircraft for those that man the Tu-22M3. Called the Black Pearl. Not quite the same plane in a manner of aspects. Tail different. Engines to the rear without the air inlets far forward. Cockpit and handling characteristics however more or less similar to the Tu-22M3 combat warplane!

Backfire having been taken out of mothballs and resurrected to combat status. Aircrews four at time can train [single aircrew consisting of a pilot, co-pilot and navigator] using the Black Pearl! A significant cost savings measure and also an indication that the Russians are serious about bolstering their strategic air capability.