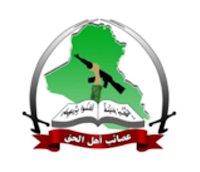 Concluding blog entries from the latest edition of the DEBKAfile newsletter dated as the week ending 15 December.

"minion - - a servile dependent, follower, or underling; one highly favored : idol; a subordinate or petty official"

"The mission that Iranian Revolutionary Guards Al Qods chief, Gen. Qassem Soleini entrusted to the Iraqi Qais al-Khazali and his militia, Asaib Ahl al-Haq (the League of Believers), embodies Iran's success in gaining its great ambition of an overland corridor under its control through Iraq up to the Mediterranean coast. In line with that mission, the militia chief was guided along the Lebanese-Israeli border on Dec. 2, for a sight at close hand the IDF's border positions before marking out locations for the deployment of his own 15,000-strong militia. This event most of all highlighted American and Israeli inertia in letting Iran's consummate its prime strategic goal of opening up new fronts against Israel from Lebanon and the Syrian Golan and man them not just with Hizballah terrorists, but many thousands of battle-hardened Iraqi militiamen who serve Tehran."

That civil war in Syria characterized by foreign interventionists and proxy forces. NOW Iraqi Shia militia to take up positions on the border between Syria and Israel? And doing so at the behest of the Iranian? Proxies with an intense hatred of Israel! This is a red flag for the Israeli which cannot be tolerated? A point-of-no-return? Big things are to follow? We shall see!