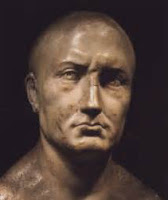 YET one more listing of WHO is the best general ever.

Thanks to a comment seen at the iSteve Internet web site.

As I have said before, ask then experts to compile such a list [best general ever] and you will get ten different lists.

"Who Was the Best Military General Ever?"

"Wish I [the person commenting to the iSteve article] could remember who it was who compiled a list of the ten greatest military geniuses of all time. These are offered without comment, except to say that if The Little Corsican [Napoleon] was number two, number one is a no-brainer. They were as follows (and separated only by a hair I might add)"

A Genghis, a Julius, a Hannibal, a Napoleon, an Alexander understand functioning not merely in the position of a general officer commanding troops on the battlefield.

Men wielding political clout as well as military leadership. Persons having the authority to formulate grand strategy, strategy, a practitioner of the operational art. and tactics.

Genghis, Julius, Hannibal, Napoleon and Alexander functioning at a much higher level of command and leadership!!