Within the context of this previous blog entry consider:

As originally seen at Sputnik and reported by Freeper:

"Russia Receives Daesh Coordinates in Al-Bab From US"

"On January 22, the Russian command center at the Hmeymim airbase has received coordinates of Daesh targets in Al-Bab, Aleppo province, via the 'direct line' from the US-led coalition headquarters. After further data verification with the assistance of unmanned aircraft and space reconnaissance, the Russian Aerospace Forces and two jets of the international coalition have conducted air strikes on the terrorists' targets," 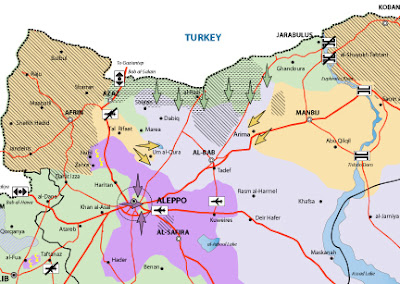 Forces as opposed to ISIL closing in from all side on al-Bab. The Turkish military for weeks now has been trying to capture the city without success? Targeting data from American assets now available to one and all but with rare exception [Assad]? As in most all cases click on image to see and expanded view.