Dien Bien Phu deja vu all over again? This time in the desert?

NOT a done deal but close to it now?

From Freeper thanks to the Internet web site MoonofAlabama and RedWulf large portions of which copied in entirety..See too my previous blog entry [item # 3] regarding this matter.

"How The U.S. Enabled ISIS To Take Deir Ezzor"

"The city of Deir Ezzor (Deir ez-Zur) in east-Syria is on the verge of falling into the hands of the Takfiris of the Islamic State of Iraq and Syria (ISIS). More than 100,000 civilian inhabitants of Deir Ezzor and thousands of soldiers defending them are in immediate danger of being murdered by the savage ISIS forces."

"But the city was well defended by its garrison of Syrian Arab Army [SAA, those forces loyal to Assad] and all further attacks by ISIS were repelled. Supply to the city was hauled in by air through the Deir Ezzor airport and through air drops by the Syrian and Russian air forces." 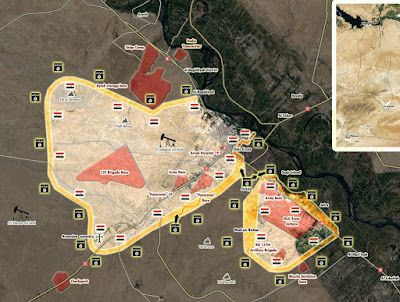 "Relief by ground forces and ground supplies are not possible as Deir Ezzor is more than 100 km away from the nearest SAA positions west of Palmyra and as the desert in between is under the control of ISIS."

"Four days ago a new attack by ISIS on Deir Ezzor was launched and has since continued" . . .

"Yesterday [1/16/17?] ISIS managed to cut off the airport, where the local SAA [Syrian Arab Army] command and its main supplies are hosted, from the city proper . . . Bad weather makes air support from the outside sporadic and difficult."

NO air-dropped or air-landed supply possible and NO overland relief possible? The end is at hand?

I THOUGHT THE ISLAMIC STATE [ISIl] WAS ON THE ROPES OR AT LEAST TAKING HEAVY BODY BLOWS THAT MEANT ISIL WAS NO LONGER CAPABLE OF OFFENSIVE OPERATIONS.