As extracted from the isegoria.net Internet web site the Russian making claims of precision-guided  bombing using iron "dumb" bombs. At least as accurate [?] if not more so than the American JDAM's or Paveway type munitions!

"The Russian Air Force, now known as the Russian AirSpace Force, has been able to maintain a high tempo of operations in Syria, launching a high volume of precision munitions surprisingly cheaply"

"Instead of mounting a kit on an old bomb and lose the kit every time, the Russians mounted a JDAM-like kit, but on the airplane."

"SVP stands for “special computing subsystem”. What this system does is that it constantly compares the position of the aircraft and the target (using the GLONASS satellite navigation system), it measures the environmental parameters (pressure, humidity, windspeed, speed, angle of attack, etc.). It can also receive additional information from datalinks from AWACs aircraft, ground stations, and other aircraft. The SVP-24 then computes an 'envelope' (speed, altitude, course) inside which the dumb bombs are automatically released exactly at the precise moment when their unguided flight will bring them right over the target (with a 3-5m accuracy)." 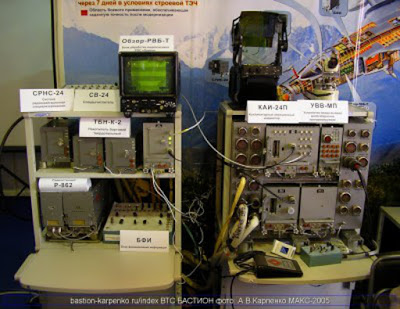 Such a Rube Goldberg like contraption as shown in this image is not for real and strictly for consumption of the general public? Personally as I am skeptical! This apparatus too has to have numerous data links that can be intercepted, jammed, spoofed?

"This digital remake of the Norden bombsight cannot be as precise as self-steering bombs, because the wind speed and direction change as the bomb falls through different air masses. But it’s good enough for the Russians, who don’t worry as much about collateral damage." - - Dave

This is the type of thing also during the Cold War that would have normally classified as TOP SECRET BY THE SOVIET? Now such is made apparent to the whole world?