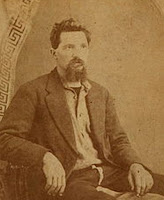 
"When I met Al Sieber, he carried twenty major knife, lance, arrow and gunshot wounds in his body. When he quit the service ten years later, he had garnered another eight serious scars. Also at that time of discharge or separation, he carried fifty three knife cuts on the butts and stocks of his various guns. He said that twenty eight of these represented those Apaches who had left their marks on him." - -  (Tom Horn)

Al Sieber. German-American best described as a military man/scout on numerous occasions displaying the highest order of courage. Also a man categorized to a degree as a "Forty-Eighter"!!

"Albert 'Al' Sieber was born in Mingolsheim, Baden as the 13th of 14 children. He was baptized on March 1, 1843 in St. Lambertus Church, Mingolsheim. His father Johannes died on September 16, 1845. Between March and April 1851, three years after the 'Badian Revolution', his mother Eva Katharina née Fischer, immigrated with her still living eight children (six had already died) to Lancaster, Pennsylvania."

An enlistee during the American Civil War. Participated in those battles of the most dangerous, difficult and downright murderous possible!

"In July 1871, General George Stoneman hired Sieber as Chief of Scouts and for much of the Apache Wars."

Al Sieber during his career as a military man/scout wounded repeatedly! Twenty-eights wounds on his body from all engagements combined!!

"Sieber was shot and wounded when Apache Kid and his followers escaped the reservation to prevent being jailed again. During his various battles and fights, Al received 28 wounds."

Al Sieber wounded many times and yet returning to the fray. Al in the same category as a:

Military personnel of high rank [or status] repeatedly wounded not abandoning their duty no matter what. This entry too totally devoid of any moral or ethical judgments regarding Oscar Dirlewanger.