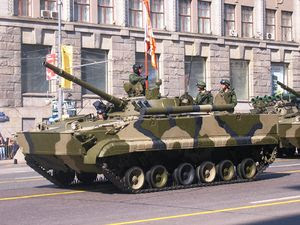 Russian BMP-3 IFV. This is not a tank!

"The BMP-3 is a Soviet amphibious infantry fighting vehicle, successor to the BMP-1 and BMP-2."

Organic firepower of this infantry fighting vehicle [IFV] very impressive. That is a 100 mm gun up-front with a coax mounted 30 mm autocannon. Also has an ability to fire an anti-tank guided-missile from that 100 mm gun! Carries an infantry fire team who when dismounti8ng can employ a 30 mm automatic grenade launcher!! What else?

Close-up of the BMP-3 turret showing the 100 mm gun with coax mounted 30 mm autocannon. That 100 mm gun I had originally thought might be firing the same rounds as the old-style Soviet era T-12 anti-tank gun but this does not seem to be so.

ONE CANNOT FAIL TO BE IMPRESSED WITH THE BMP-3! BRADLEY HAS BEEN LEFT BEHIND IN THE DUST!!