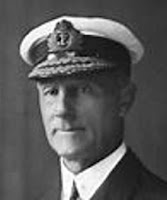 As it was 100 years ago during the Great War as seen at Freeper:

"Did the Battle of Jutland Really Matter?"

"A century ago, the two greatest fleets of the industrial age fought an inconclusive battle in the North Sea. The British Grand Fleet and the German High Seas Fleet fielded a total of fifty-eight dreadnought battleships and battle cruisers, ships over the twice the size of most modern surface combatants. Including smaller ships, the battle included 250 vessels in total."

"The battle was fought from 31 May to 1 June 1916 in the North Sea, near the coast of Denmark's Jutland Peninsula. It was the largest naval battle and the only full-scale clash of battleships in the war."

John Jellicoe the overall commander of the Grand Fleet seen as a man vacillating, indecisive, TIMID!

Timid that word within the military context pejorative and understood as meaning non-aggressive, non-assertive. Not necessarily cowardly but not bold!

MORE IMPORTANTLY THE DEVOTED READER TO THE BLOG MUST GRASP THAT JELLICOE UNDER UNFAVORABLE LIGHT CONDITIONS WHILE THE BATTLE WAS RAGING  HAD A WHOLE THIRTY-SECONDS TO DECIDE HIS NEXT COURSE OF ACTION!! WITHDRAW SAFELY FROM THE SCENE OF THE ACTION OF PRESS THE ATTACK HOME!!

When the fate of the nation is in the balance prudence and caution is a virtue?

ONLY a decade or so later the Admiralty staff concluded during a MAPEX war simulation that Jellico had made the right decision. Jellico at the time described as the one person WHO COULD WIN OR LOSE THE WAR IN ONE DAY MORE SO PRUDENT THAN RASH! Measured audacity is a virtue in the military sense but that day and at that exact moment caution more suitable.