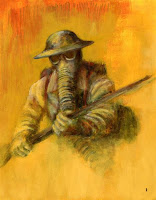 "First World War battlefield in Verdun still a danger with thousands of exploded shells 100 years on. Nearly 100 years since the end of the First World War and there are still areas of France unsafe to be visited because of unexploded shells. Some 300,000 soldiers were killed in the Battle of Verdun between France and Germany from February to December 1916. During the onslaught, around six million shells - including many containing mustard gas - were fired by the opposing sides. One million of those failed to explode. Dozens of unexploded shells are unearthed every day"

See previous blog entry the topic of which was unexploded ordnance from both World Wars.