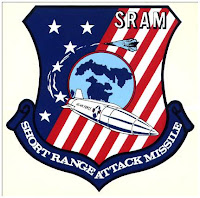 Came across this quite by accident. Also consider this yet more instance American military high-technology as defective.

SRAM! Short-Range-Attack-Missile. That replacement for the Hound Dog SEAD missile. SRAM a weapons system with nuclear warhead as carried by American  B-52 bombers.

"SRAM entered service in 1972 and was carried by a number of aircraft, including the B-52, FB-111A, and the B-1B. In September 1980 a ground fire raised concerns about the safety of the warhead, and in 1990 they were temporarily removed from service while safety checks were carried out. These revealed a number of the missile's rocket motors had developed cracks that could have resulted in them exploding when launched."

CONCERNS RAISED FIRST IN 1980 BUT NOT INVESTIGATED UNTIL 1990?? CONCERNS VALID BUT NOT AS ORIGINALLY PERCEIVED, EVEN MORE ACUTE IN RETROSPECT! WEAPONRY INDEED ARMED WITH ATOMIC WARHEADS!

Read further and as had been relied upon "American military high-technology" found to be defective, more or less useless if not downright dangerous to the user. Technology too having an atomic weapon application: