From the Russian Times [RT] media outlet an irony as noted but not the full and complete story. 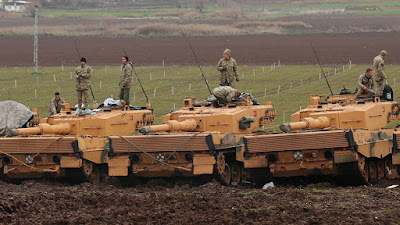 Turkish Leopard 2 tank with turret facing rearward as part of the most recent Afrin Operation Olive Branch. These are the tanks as the German will no longer provide either a finished unit or spare parts for? Image © Umit Bektas / Reuters.

"Since WWI, armies have provided code names for their military operations. Many, however, have been euphemisms to conceal what really stands behind them." 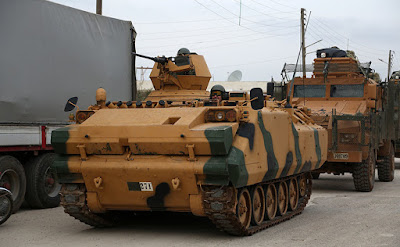 An image of heavily a modified American M113 armored personnel carrier? Turks [?] took the basic vehicle as originally designed in the mid-1950's and have created a much more potent infantry fighting vehicle [IFV]. Image © AFP.

Within the context of the RT article and least we forget consider that military operation from the era of  the Second World War, most appropriately/inappropriately named with regrettable hindsight! OPERATION STALEMATE!

The Battle of Peleliu.

"The Battle of Peleliu, codenamed Operation Stalemate II by the United States military, was fought between the U.S. and the Empire of Japan during the Mariana and Palau Campaign of World War II, from September to November 1944, on the island of Peleliu."

STALEMATE the landing and capture of Peleliu as planned to last for four days max. Lasted more than four weeks!! STALEMATE became A STALEMATE!

ROCK AND CORAL ISLANDS OF THE PACIFIC THAT BEST TERRAIN IN THE WORLD FOR CONDUCTING A DEFENSIVE BATTLE!

The devoted reader now has the rest of the story and is more the better for it!