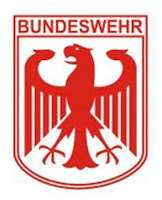 From Harry at Sharkhunters and thanks to WIZARD!

How the mighty have fallen. Once the bulwark of NATO defense now rather enfeebled so it seems. The Bundeswehr combat capability severely degraded.

Items of equipment as not "ready for action" to include but not strictly limited to I might well imagine:

My thought was always the Bundeswehr was the ground component of the German military forces. But this is not so. Bundeswehr the combined and united German military, army, navy, air force and ancillary organizations.

Six of those seven items as listed pertaining to the German Air Force [Luftwaffe]. That status of the German submarine contingent already the topic of a prior blog entry.