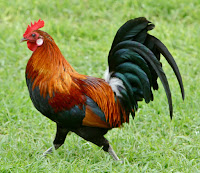 Place this entry in the strange but true category. Billions of English Pounds [£] for chickens but not a penny for defense?

From WIZARD through Harry:

"MoD [Ministry of Defense] pays millions to farmers for scaring their chickens to death! The Ministry of Defence has been inadvertently contributing money to the UK's farming industry, with figures showing it has paid out nearly £2m [$2.78 million USD] in compensation to farmers in possession of petrified animals. The money has been paid out to managers of stocks of chickens, horses, pigs, sheep and cows who have asked for compensation over their beasts being stressed by low-flying jets and helicopters. The payouts include 22 made to the nation's poultry farmers who claim their hens have stopped laying after being buzzed by a large metallic bird they interpret as a predator, with a lump sum of £79,041 going to a poultry farm in East Sussex where a Chinook [CH-47] triggered a horrific panic in a bird house that led to the deaths of hundreds of hens. £42,700 was paid to a farmer whose cows literally died from shock after being inadvertently buzzed by a helicopter in Co Tyrone, with a more modest contribution £2,200 going to the owner of a single parrot in Ayrshire that was apparently scared to death by a Hercules [C-130] transport plane."

I would say something witty such as those amounts of money no chicken feed but refrain from doing so!