From that era of the Soviet invasion of Afghan the particulars of this disaster never clarified. Other than very bad!!

Salang tunnel and the Salang Tunnel fire. As copied more or less in entirety from the wiki.

"The Salang tunnel, which opened the famous Salang Pass (or Kotal-e Salang) to motor traffic, was built by Soviet engineers and eased traffic across the Hindu Kush mountain range that separates northern and southern Afghanistan." 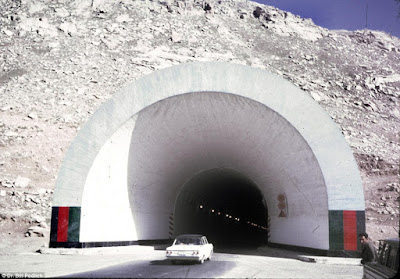 "Very few facts are known about the fire. All information available constitutes little more than hearsay, in part because the Soviet Army was not inclined to reveal massive losses during wartime. Most sources agree that it involved a Soviet Army convoy traveling southward through the tunnel."

"Initial reports described fuel and ordnance explosions, and estimates of the death toll were as high as 2,700. The death toll was subsequently revised downwards many times."

"According to Soviet Army records, on 3 November 1982 two military convoys (2211 and 2212) collided in the Salang tunnel causing a traffic jam. There were no fires or explosions. Sixty-four Soviet soldiers and 112 Afghan people were killed by carbon monoxide emitted by idling engines."

"Another report from a traveler, who has been to the region, sounds very different from this official version: A fuel tanker in a military convoy exploded inside (the cause of the explosion remains somewhat in doubt with the Russians still claiming it was an accident and the Mujahideen still claiming it was a successful attack) the Salang Tunnel, unleashing an explosive chain reaction. Drivers of cars, trucks, and buses evidently continued to enter the tunnel after the explosion. Soviet troops, fearing that the explosion might have been a rebel attack, closed off both ends with tanks, trapping many inside. Some burned to death; others were killed by smoke and by carbon monoxide escaping from vehicles whose drivers kept their engines idling to stay warm in the freezing cold. As many as 700 Soviet troops and 2,000 Afghan soldiers and civilians may have died."

See at the Daily Mail an article with photographs a much different Afghan that existed prior to the constant state of warfare as has existed for almost four full decades now!! Way before the Taliban there was a much more kindlier and gentler Afghan.