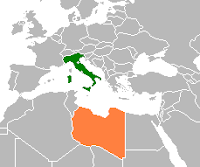 NOWHERE in the main stream media have I seen mention of this:

"British Special Forces have been deployed in Libya to wrest back control of more than a dozen oil fields seized by Islamic State (IS, formerly ISIS/ISIL) militants, it has emerged."

"Approximately 6,000 European and US soldiers, including 1,000 British troops, will be involved in a number of offensives set up to halt the advance of the jihadist terror group."

"The operation will be led by Italian forces and supported mainly by Britain and France."

Those historical links between Libya and Italy quite strong.

During Roman times what we now call Libya was referred to as Cyrenecia.

The "break-basket" of Rome, Leptis Magnus in particular. Back in days of yore it was grain that was important. Today it is OIL!

Roman ruins proliferate in Libya, antiquities from the time of the various Emperors quite intact.

That recent history of Italy and the Italian in North Africa rather less inspiring. Libya as the territory now understood occupied, colonized and settled by Italians. Guerrilla warfare endemic the entire time.

The Italian and NATO forces will be warmly greeted by the Libyan people? EVEN THIS CAN BE SURMISED TO BE A NATO MISSION? ARTICLE 5 OF THE NATO CHARTER HAS BEEN INVOKED?:

And hardly however can we forget the Italian military enigma from both World Wars. The Italian not so brilliant in battle! NOW it will be different?