Within context of a recent blog entry. Nothing new under the sun! Thanks to the article as seen at the Internet web site "Wired".

It might have been the greatest lost weapon of World War II. Major-General JFC Fuller, the man credited with developing modern armored warfare in the 1920s, called failure to use it 'the greatest blunder of the whole war'. He even suggested that British and American tank divisions could have overrun Germany before the Russians – if it had been deployed, that is.

"Over three hundred CDLs were built – using Matilda, Churchill and Grant tanks – and might have played a major role after D-Day. But instead, they remained unused. There seem to have been two reasons for this. On the one hand, the power of the CDL was kept extremely secret. 'Even the Generals who should have used it did not know what the tank could do,' . . . And those that had heard of it had trouble believing that a simple flickering light could have any effect." 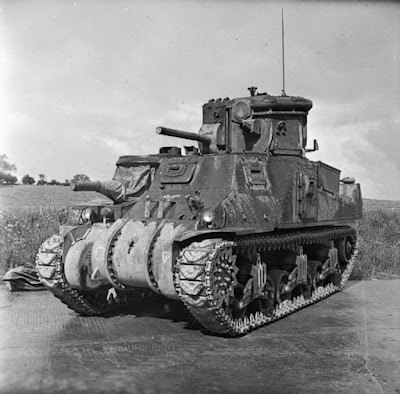 A Grant tank as equipped with a CDL. Click on image to enlarge. The CDL the vertical slot on the turret. Gun to the left of the CDL a dummy as reported.