Caracal we know about. Lions of Jordan I did not know about. And now a third unit forming.

Androgynous. Having characteristics of both male and female. As does the caracal cat. Israel combat units consisting of both men and women.

All thanks to Sheldon Adelson and Israel Hayom.

"This year's August draft will also inaugurate the third mixed-gender combat battalion in the Israel Defense Forces, Israel Hayom has learned. The new battalion will be defined as a light infantry battalion assigned to protect the borders, much like the existing Caracal and Lions of Jordan battalions."

"Welcome the IDF’s newest infantry battalion, the 'Lions of Jordan'. The 'Lions'are like any other infantry battalion, except for one aspect: they form a co-ed infantry force. Women in the unit will train and fight alongside men. Their task will be to guard Israel’s eastern border – a role that will place them on the front line of Israel’s defense" 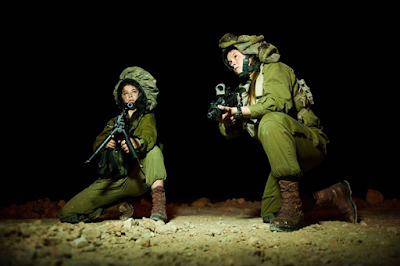 Two women [lionesses] of the "Lions of Jordan" battalion. Wearing the "clown" helmet cover. May I remind you that in a pride of lions it is normally the female that do the killing.

Women incorporated into combat units is a response to a demographic problem with the Israeli draft age population? Contrary to popular opinion a rather significant percentage of Israeli citizens are exempt from compulsory military service. A demographic that slowly but surely grows from year to year. That demographic consisting of young Israeli Arab youth and haredim Jewish ultra-orthodox.

These mixed gender combat arms units will mainly patrol, do reconnaissance, border watch, etc. TASKS FOR WHICH IT IS OFTEN SUGGESTED THAT WOMEN DO BETTER THAN MEN! We shall see!