From an Internet technology web site we have the story of the cyborg. Combination organic animal species and micro-electronic machine!


"Cyborg. Cybernetic organism. A person [an insect] whose physiological functioning is aided by or dependent upon a mechanical or electronic device."

And as a weapon of WAR! 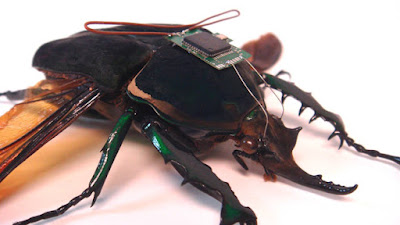 "Defense Advanced Research Projects Agency (DARPA) . . . has developed a part insect, part machine that they call the Hybrid Insect Micro-Electro-Mechanical Systems program. Basically, DARPA take an insect at the metamorphosis stage of development and then insert a controlling mechanical device. This allows them to fly the developed insect into tightly controlled spaces for surveillance purposes. This literally allows them to bug the enemy. It’s kind of spooky when you start to think about the domestic 'big brother' applications."

EVEN BETTER WOULD BE TO BREED THESE BEETLES [IF POSSIBLE] TO THE SIZE OF A LARGE DOG. CREATE A COMBAT SOLDIER YOU COULD PROLIFERATE THE BATTLEFIELD WITH, TERRIFYING JUST BY THE THOUGHT ALONE!!

Insect species not possessing brains as that word brain commonly, ordinarily and generally understood. Responding to chemical stimuli and that alone for all functions. That "mechanical device" [microelectronic solid-state circuitry I might assume] also complete with nano-factories for producing needed and desired stimuli chemicals on demand.

WITHIN THE REALM OF THE ANIMAL SPECIES ANTS BEING THE ONLY OTHER ORGANISM OTHER THAN MAN THAT WAGES WAR! BEWARE!