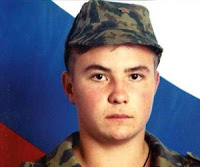 “your son had a choice to stay alive. He could have converted to Islam, but he did not agree to take his cross off.” - - Purported executioner.

"On this date in 1996 — his 19th birthday — Russian hostage Yevgeny Rodionov was beheaded by his captors outside a village in Chechnya."

"The young conscript was seized by guerrillas/terrorists/rebels along with three other comrades* during the horrible Chechen War."

EXECUTED BY BEHEADING AFTER RANSOM DEMANDS COULD NOT BE MET. YEVGENY NOW A MARTYR FOR THE FAITH [RUSSIAN ORTHODOXY]. YEVGENY COULD HAVE BEEN SPARED IF HE HAD DENIED HIS RELIGION BUT HE DID NOT.

I have often asked myself how would I have responded in such a situation. And of course the 100 % true answer is you will not know until you actually face events of that nature in person.

YEVGENY HAS DEPARTED THIS EXISTENCE BUT IS NOT FORGOTTEN.