Some damn fool thing in the South China Sea? The Pratas Islands??

From the English tabloid The Sun and the tip from Freeper:

"CHINA is reportedly set to deploy its two new aircraft carriers off the coast of Taiwan as it warns the US of a 'new cold war'".

"The huge carriers, the Liaoning and Shandong, are currently engaged in combat readiness training in the tightly controlled Bohai Bay, in the Yellow Sea before sailing to join an invasion war game near Pratas island." 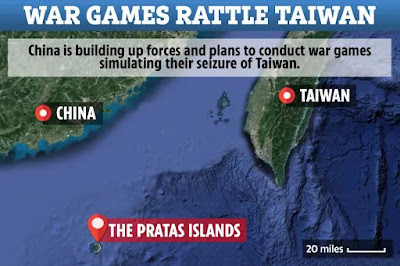 Graphic thanks to The Sun. Pratas little itty-bitty fly speck islands as claimed by both Taiwan and mainland China. 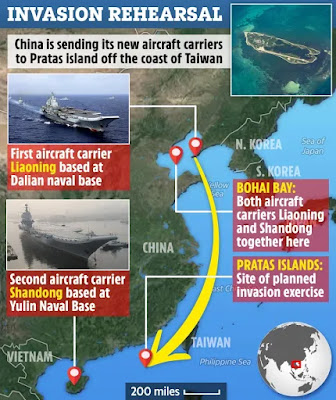 Again thanks The Sun for the graphic. A task force of two Chinese aircraft carriers in coordinated operations the military exercise having the Pratas Islands as the target. Chinese amphibious military units are actually going ashore. That would be very bad. The Chinese too within the context of the Covid-19 pandemic have chosen the worst possible moment for this "exercise" to occur.

Consider also from the wiki entry for Pratas Islands the military history circa WW2:

"Japanese naval personnel occupied Pratas Island during World War II. The Japanese Navy used the island as a weather station and listening outpost [seaplane base also?] until 29 May 1945 when a landing party consisting of Australian commandos and US naval personnel from the submarine USS Bluegill raised the US flag, declared the island a United States territory, and named it Bluegill Island. The landing party destroyed a radio tower, weather station, fuel and ammunition dumps, and several buildings. No lives were lost during this raid as all of the island's occupants fled just days prior to Bluegill's raid. The islands were later restored to the Republic of China's Guangdong Province."

INDEED. THE USA CAN JUSTIFIABLY JURISDICTION AND SOVEREIGNTY THE PRATAS ISLANDS BY RIGHT OF CONQUEST? DISMISS SUCH AN IDEA OUT-OF-HAND?