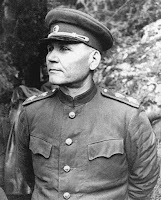 "had [the Russians] 'provoked a completely inappropriate reaction from Russia.' . . . 'are calling [Russians are calling] on Czech citizens to physically liquidate those who have their [fingerprints] on removing the statue.'”

More on the removal of the memorial statue of the famous Soviet Marshal Konev. As was the basis for a previous recent blog entry.

"Russia waging ‘HYBRID WAR’ on Europe by protesting removal of Soviet liberator statue, claims Czech official who had it torn down"

"A Prague official responsible for removing a statue of Marshal Konev urged Brussels to protect the EU against Moscow’s 'interference' and 'hybrid war,' playing the time-tested ‘Russia scare’ card that never fails to be effective."

CZECH AT LEAST DURING THE TIME OF THE COLD WAR WERE THOUGHT TO BE FAIRLY RELIABLE MEMBERS OF THE WARSAW PACT?  THAT WAS NOT REALLY SO?