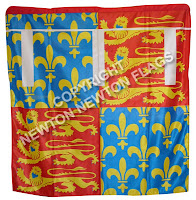 "My lord. The Black Prince approaches. With a large retinue."

The man given a bad deal in history. His manner of behavior as described hard but not cruel? Edward encouraging his troops to engage in atrocity contrary to the common practices of land warfare as existed and were acknowledged at the time?

"Was Edward the Black Prince really a nasty piece of work?"

Edward famous/infamous in history for his repeated chevauchée. Repeated military raids into French territory. provoke the recalcitrant French nobility into battle. Compel them to. Using murder, rape, arson and pillage as his provocations. Committing said provocations again on a repeated and large scale.

"Chevauchée: A chevauchée was a raiding method of medieval warfare for weakening the enemy, primarily by burning and pillaging enemy territory in order to reduce the productivity of a region"
This is all  wrong? The perception of Edward rather more mild instead?

REPUTATION [of Edward] RETHOUGHT AND NOT EXONERATED. IT ONLY TOOK OVER SIX-HUNDRED YEARS.

"He was the superstar of his age, winning his spurs in battle aged just 16. But the reputation of Edward of Woodstock - or the Black Prince, as he has become known to history - is still the subject of the same type of dispute that rages over the reputations of Richard III and Oliver Cromwell."

MOST SPECIFICALLY SO THE MASSACRE OF THE INHABITANTS OF LIMOGES THE TYPE OF ATROCITY AS ATTRIBUTED TO EDWARD. THREE-THOUSAND FRENCH CIVILIANS, NON-COMBATANTS KILLED, SO IT IS SAID.

That casualty figure in reality only three-hundred men-at-arms according to the latest evidence?

Edward referred to as the Black Prince: 1. That he was a perpetrator of atrocity. 2. That he word black armor. Take your pick.

WELL, IT ONLY TOOK SLIGHTLY MORE THAN SIX HUNDRED YEARS FOR THIS ALL TO COME OUT? I GUESS BETTER LATE THAN NEVER?