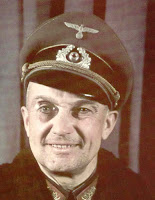 "By September 3, Patton's Third Army crossed the Meuse River and headed for the Moselle. The view from the other side was depressing. Roads out of France were choked with German soldiers and superfluous occupation bureaucrats. Scenes of panic erupted everywhere, with columns jostling for position. Fights broke out among unkempt German soldiers drunk on looted cognac. It was the death of an army, or at least that's what the Allied thought."

"What they didn't see - - couldn't see - - was what was happening underneath. Yes, the Wehrmacht was in a tailspin, but it was already recovering its equilibrium. New divisions were rushed to the front, made up of men from rear areas and offices - - even the lightly wounded from the hospital. The High Command sent up to 100,000 new men to France in the first half of September. Military police cleared roads, restored order, and in some cases executed deserters."

The German general officer Model in command. Model the master of the defense and containment of the breakthrough offensive! Model in particular as with many other German senior commanders also proficient at constituting ad hoc units that when fighting defensively were able to give a good account of themselves. As was the case at Metz. Patton stymied for three months by German units under-manned, under-equipped, and under-trained. But well-led and still very dangerous under the correct circumstances.