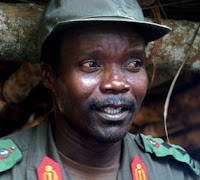 As seen at Strategy Page "On Point" an article by Colonel Austin Bay as dated March 29, 2017 the subject of which is Joseph Kony.

We have not heard of Joseph for a while now. Efforts to catch the man and run him to ground unsuccessful. Joseph on the loose and very dangerous,

"Kony is an evil man. Note the present tense: is, not was."

AT LEAST SIX FULL YEARS OF AMERICAN MILITARY RESOURCES BEING BROUGHT TO BEAR ON THE SUBJECT TO NO AVAIL! THIS ALL IN ADDITION TO PRIOR FUTILE EFFORTS TO EITHER ELIMINATE OR BRING THE VILLAIN TO JUSTICE.

More or less now Joseph seen as a nuisance and a hindrance and not as an existential danger? That is the perception? Joseph seems to lead a very charmed life and we have NOT heard the last of him? I fear it is so!