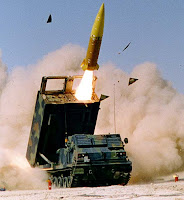 A blast from the past literally so! American rocket artillery systems as modified being given a mission for which I think most experts thought was archaic and passe' not even worthy of consideration.

"March 7, 2017: The U.S. Army is once more upgrading its MGM140 ATACMS (Army Tactical Missile Systems) artillery rockets. The ATACMS is a 610mm ballistic missile that fits in the same size container that normally holds six 227mm MLRS rockets. The new upgrade is because it was realized that ATACMS has sufficient range to reach ships far offshore . . . it is not a difficult feat to develop a terminal guidance system for ATACMS that searches for a certain size ship and heads for it while moving at more than a thousand meters a second (faster than a very speedy bullet)".

Dig this stuff regarding that transporter vehicle: "The windows are made of glass and layers of sapphire." Blast of the missile on launch [a missile in the sense of being guided] must create an intense heat that melt or severely damage glass? Precaution taken to mitigate the problem expensive?

COASTAL ARTILLERY IN THE DAYS UP UNTO AND INCLUDING THE SECOND WORLD WAR A SEPARATE BRANCH OF THE ARMY WITH WHAT WAS PERCEIVED AS AN IMPORTANT MISSION. THIS MIGHT BECOME THE CASE AGAIN?