Continuing with the military sketch art extracts and commentary from Der Landser. 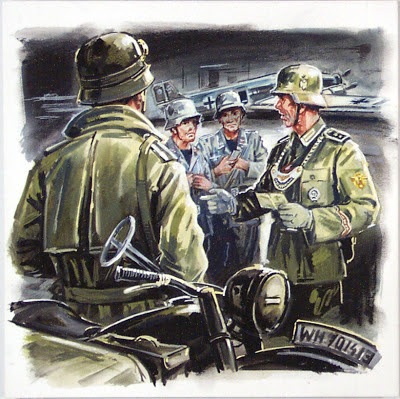 Feld Gendarmes. German military police. Instantaneously recognizable by the gorget hanging from the neck. That gorget a symbol of authority. The Feld Gendarme all either non-commissioned officer or of the officer rank, one and all. This particular Feld Gendarme questioning and examining the papers of two other German soldiers. The Feld Gendarme on the alert for deserters, malingerers, shirkers. That Feld Gendarme hardly a man to be trifled with or shown disrespect toward. Quite the opposite! 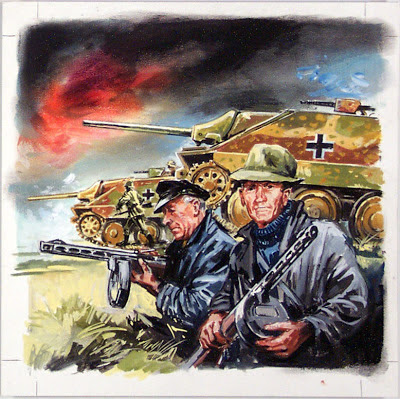 This particular image taken from a Der Landser issue entitled "Battle for Berlin". Shows middle-aged men moving forward to engage the Soviet invader, 1945. Middle-aged men beyond the age of conscription [45 years] and armed with captured Soviet PPsh submachine guns. These men dressed in civilian dress constituting the Volksturm [Peoples Storm]. Many of these men more than likely having seen military service and combat during the Great War [WW1]. Volksturm defending Berlin with small arms to include the armor defeating shaped-charge rocket-propelled grenade casualties among these somewhat elderly men catastrophic!