But the story continues.

"ANOTHER Chinese spy balloon is spotted: Mystery 'surveillance device' floated over Costa Rica before reaching Venezuela, the Pentagon confirms amid frenzy over airbone spyware in the air over the United States"

* "Second Chinese spy balloon was spotted over Latin America, officials confirmed" * "Pentagon said it does not appear the balloon is heading into the United States" * "It comes after a different Chinese balloon hovered over Montana and Missouri"

A second Chinese spy balloon was spotted hovering over Latin America just hours after the Pentagon accused Beijing of using a similar balloon to spy on sensitive military sites in the US. 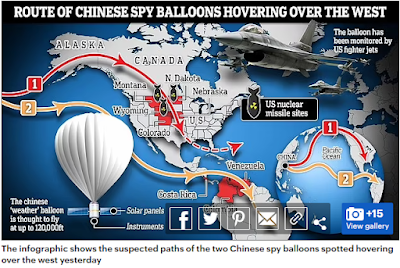 Click on image to see an enlarged view. Thanks to the Mail for the graphic.

"Early reports indicated the surveillance craft was flying over Costa Rica, Colombia and Venezuela. Officials say the new balloon does not appear to be heading to America."

* Several things missing from the Mail graphic. Course of balloon as it crossed the continental USA also passing well within LoS distance of additional important military facilities to include Whiteman AFB and King's Bay naval submarine base.

* And as for the second off-course balloon South America? What do we make of that?

Debris from the instrument package if recovered will be of intense interest to USA military planners?

Shoot the damned thing down! Now!

Unmanned Chinese surveillance balloon now over USA not wholly dependent on the upper air current direction for course? Has some sort of undisclosed technology that allows for course correction?

From www.dailywire.com  DailyWire.com the article by Ryan Saavedra | Feb 3, 2023.

"The U.S. Department of Defense revealed Friday that the suspected Chinese spy balloon that is flying over the United States has the ability to maneuver and has changed direction at 60,000 feet."

"Pentagon Press Secretary Brig. Gen. Patrick Ryder would not say how the balloon could be maneuvered and refused to state if the communist Chinese government was in control of the balloon."

There is a LOT of media attention to this high-flying Chinese balloon. All the experts are of the opinion that they baffled as to the intention of the balloon payload if this flight it is indeed that of an intelligence and surveillance mission. The consensus is that you can do all that sort of "spy work" so much easier and without creating a headache if you USE satellites of which the Chinese have more than a few in orbit.

A maneuverable balloon totally unlike that of the American Genetrix series of photographic intelligence balloons NOT floating aimlessly driven only by the winds of the upper atmosphere I must admit as far as I know a first.

Maybe more than maybe the USA needs to shoot that balloon down and do so now!

"Reports suggested that glue was used to stick broken bolts of HMS Vanguard’s reactor chamber.   An urgent investigation was ordered by the Royal Navy amid claims that broken bolts in the reactor chamber of the Trident nuclear-armed submarine were fixed using glue by workers. As per a report by the Sun, faulty repairs were discovered on HMS Vanguard’s cooling pipes after one of the bolts came out during an inspection."
I would have to assume that every last single bolt already inserted as part of this repair process would have be removed and inspected for intactness.
You cannot dodge the bodge.
coolbert.
Posted by Albert E. at 8:45 AM No comments:

“The balloon is currently travelling at an altitude well above commercial air traffic and does not present a military or physical threat to people on the ground,” - Brig. Gen. Patrick Ryder.

And as such must be considered in the historical context.

"The US military is tracking a suspected Chinese high-altitude spy balloon as it makes its way over the northern United States."

"Pentagon spokesman Brig. Gen. Patrick Ryder said that the US has so far decided against shooting down the surveillance balloon" 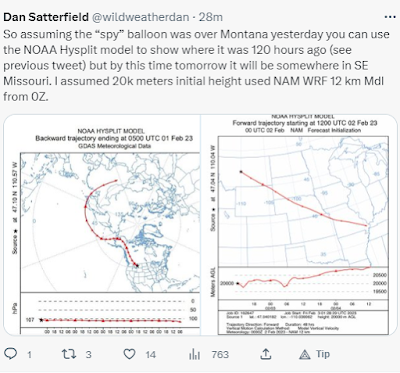 "Between 10 January and 6 February 1956, a total of 516 high-altitude vehicles were launched from the five different launch sites Gardermoen, Norway; Evanton, Scotland; Oberpfaffenhofen and Giebelstadt, West Germany; and Incirlik, Turkey; 54 were recovered and only 31 provided usable photographs."

Take and product from the project rather scant and mediocre for the amount of effort. Genetrix "discovered only one target of significance".

USA also testing from four years ago much to my surprise newer and extremely more sophisticated high-altitude drifting surveillance balloons.

2. "Pentagon testing mass surveillance balloons across the US"

"Exclusive: the high-altitude balloons promise a cheap monitoring platform that could follow multiple cars and boats for extended periods"

"Up to 25 unmanned solar-powered balloons are being launched from rural South Dakota and drifting 250 miles [400 km.] through an area spanning portions of Minnesota, Iowa, Wisconsin and Missouri, before concluding in central Illinois."

A balloon drifting at an altitude of 70,000 feet [22,000 meters] that line-of-sight either side of the balloon's path about three-hundred seventy-five miles [600 km.].
Balloons yesterday, today, tomorrow, forever.
coolbert.

Never thought of this one before. But Moscow did!

Time zones as an expression of sovereignty?

The Russian exercising control of conquered territory the Ukraine Conflict.

"If the new law is approved, residents in all four territories will have to put their clocks forward an hour, having previously observed Eastern European Standard Time, the same as Ukrainian capital Kyiv."

Passports/TV weather broadcast insets/stamps/maps/scarves/cartoons/bank notes all as an expression of  "revanchist ideals or territorial designs". 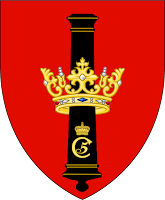 “'a bird in the hand is worth two in the bush' - Essentially, the proverb means to be grateful for what you have rather than lust after the prospect of something better."

Denmark generous to a fault?

"Denmark to send artillery to Ukraine, delaying own build-up"

"Kyiv last month asked Copenhagen to supply the weapons systems, sparking a debate in Denmark over whether the country could afford to donate much-needed artillery at the expense of its own armament as it seeks to build up depleted stock."

THE ENTIRE DANISH ARMY ARTILLERY INVENTORY TO BE DONATED TO THE UKRAINIAN!!

The Royal Danish Army now sans artillery at least until 2024 at the earliest? Israeli ATMOS 2000 as a replacement but still in the pipeline as we speak.

Consider the Dane NOW not being able to EXECUTE NATO mission if called upon?

I know Denmark a sovereign nation but was NATO told about this advance with consultation?

This is coolbert:
Wagner PMC quite intentionally recruiting Americans? Seems to be so. Personally I was surprised there even was such an effort.
See this You Tube video: "Recruiting video for Americans to join Wagner PMC".


To see the closed caption in English: go to settings - subtitles - English (auto generated).
Appeal here to the American trained and experienced military man of patriotism, the perspective of a degenerate and decaying society, fascism and the threat of atomic annihilation all a possible and inevitable unless something must be done and fast.
Join Wagner PMC!
coolbert.
Posted by Albert E. at 6:25 PM No comments: