Here two instances of warships not even able to make one voyage without sinking.

1. USS Guitarro. American nuclear powered attack submarine having been launched but sinking while at dock, construction crews to blame, the ship settling to the bottom without even having left port on a single occasion.

This particular web site with lots of images devoted to the sinking, raising and placing back into action the Guitarro that process a major construction project just unto itself. 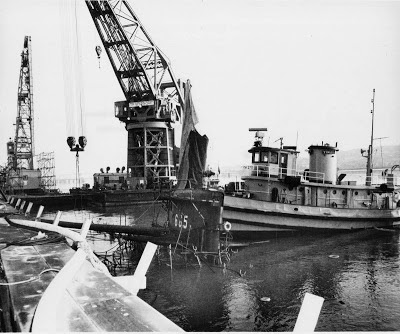 That tug on the right preventing the Guitarro from capsizing. # 665 that number of the Guitarro. Those monstrous cranes to lift the vessel off the bottom as water is pumped out!!

The nuclear reactor and fuel having NOT been installed or the vessel carrying any weaponry, catastrophic disaster even beyond a sinking averted, but perhaps only slightly less so humiliating.

Guitarro successfully raised from the bottom, cleaned, restored to fighting trim and sailing in an admirable manner for thirty years subsequent, unfazed it seems by the experience.

[such a warship would normally deemed as "jinxed" and unlucky and sailors hesitant to board the ship.]

Immersion total in salt water for any period of time especially destructive to any and all electronic gear, I cannot even imagine what would have occurred to the nuclear reactor.

2. Vasa. Swedish naval vessel, a sailing warship from the old school AND AT THE TIME OF CONSTRUCTION PERHAPS THE MOST POWERFUL WARSHIP [?] IN THE WORLD, FOUNDERING AND SINKING ON THE MAIDEN VOYAGE, NOT ABLE TO GET VERY FAR FROM PORT!!

Again, the humiliation most great, recovery to the extent of removing from the bottom bronze cannon property of the Swedish King a paramount issue, the ship not until the latter half of the last century resurrected and brought back to the surface NOW that most important tourist attraction in all of Sweden.

"Vasa (or Wasa) is a Swedish warship built 1626-1628. The ship foundered and sank after sailing less than a nautical mile (ca 2 km) into its maiden voyage on 10 August 1628. It fell into obscurity after most of its valuable bronze cannon were salvaged in the 17th century . . . Vasa was built top-heavy and had insufficient ballast. Despite an obvious lack of stability in port, it was allowed to set sail and foundered only a few minutes after it first encountered a wind stronger than a breeze"

"A wind stronger than a breeze" and that was that.

You would have thought by now and even at the time of the Vasa these naval architects and construction crews would have all the protocols and procedures worked out and honed to fine technique devoid of any possible failure.

That is evidently not so!!