Here begins a series of blog entries, extracts of military sketch art from the German Der Landser magazine with my commentary.

To be honest I was actually surprised that a magazine such as Der Landser was allowed to be published in Germany.

Evidently this type of "dime novel" and "pulp fiction" magazine has been around at least since 1956 and is nearing sixty years of publication.

There are nearly 3,000 [?] weekly issues in print and the tradition continues unabated.

Der Landser devoted the lowest ranking German common soldier of the Second World War [WW2]. German troops of the Heer [some stories deal with the sailor of the Kriegsmarine or aviators of the Luftwaffe] portrayed as always brave, courageous, and stalwart, performing their duty with skill and panache'.

NO mention ever [?] made of the Nazi regime, Hitler, or the other things.

"Der Landser (private, common soldier) is a German pulp magazine . . . featuring mostly stories in World War II settings . . . The magazine claims that its war novels are true stories and that their underlying message is one of peace. In fact many of their stories come with disclaimer reminding the reader of the horrors of war."

"In THE LANDSER read every week Personal stories from the front of World War II events. From the perspective of the fighting forces and by the memory of individuals, the largest military conflict in world history in all its drama is clear. Based on individual stories, the reader is shown the tremendous hardships and sacrifices that the war demanded 1939-1945 daily by the soldiers and officers."

That "dime novel" also sometimes referred to as "pulp fiction" best defined as:

"In the modern age, "dime novel" has become a term to describe any quickly written, lurid potboiler and as such is generally used as a pejorative to describe a sensationalized yet superficial piece of written work."

To the extracted images with commentary: 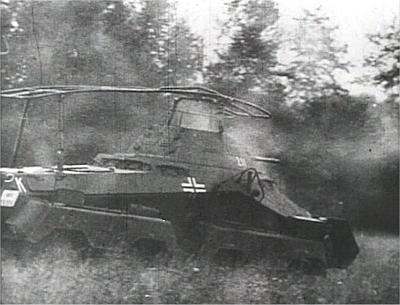 Here a German Sd.Kfz. 232 eight wheel reconnaissance vehicle as seen during the Ardennes Offensive of 1940. "The Sd.Kfz. 232 (8-Rad) was produced from 1938 to 1943 . . . many of the old vehicles were upgraded with new radio communication equipment, replacing the "bedstead" with more modern and compact wire antennas . . . It was armed with a 2 cm [20 mm] KwK 30 L/55 autocannon . . . [and] also carried a 7.92 mm . . .  machine gun. That apparatus as mounted on the vehicle a RADIO ANTENNA! My original thought was that this was some sort of protection in case of vehicle roll-over. NOT so! 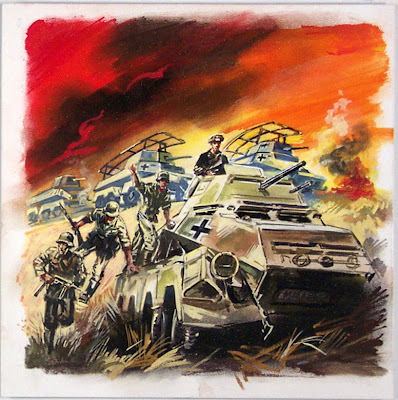 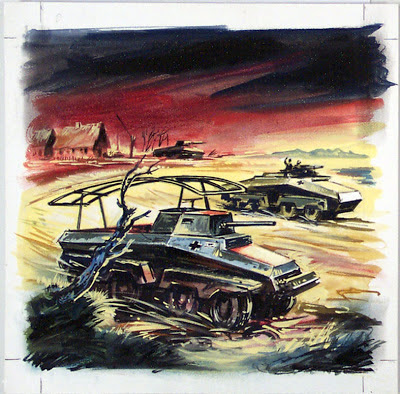