With regard to the latter, we might hope NOT EXACTLY SO!

Thanks to the AP through core.com. Park Geun-hye's the daughter of the late Park Chung Hee just elected President of South Korea [ROK].

This even a milestone, unprecedented. NOT in over 1,000 years has a woman ruled in Korea!!

"No Korean woman is believed to have ruled since the ninth century. Park becomes the most powerful figure in a country where many women earn less than men and are trapped in low-paying jobs despite first-class educations."

Park Geun-hye's elected in a fair and free manner, that ROK populace now living in a nation very democratic and prosperous.

The legacy of her father however in the minds of many South Koreans very mixed.

"Her father's legacy is both an asset and a weak spot. Older South Koreans may revere his austere economic policies and tough line against North Korea, but he's also remembered with loathing for his treatment of opponents, including claims of torture and summary executions."

That ONE South Korean military officer that ALL Americans stationed in Korea during that era of the Cold War paid the greatest amount of respect and deference to.

That ONE South Korean never to be trifled with or ignored.

"Park Chung-hee (September 30, 1917 – October 26, 1979) was a Republic of Korea Army general and the leader of South Korea from 1961 to 1979 . . . Park has been credited with the industrialization and rapid economic growth of South Korea through export-oriented industrialization. However he ruled the country in an authoritarian manner" 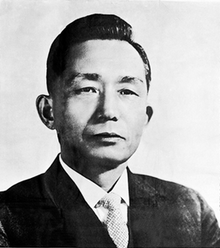 This austere and stern man whose commands were to be obeyed and also quite capable of having your head busted open if he deemed it necessary!

General Park noted as both a Korean nationalist and an authoritarian not afraid to knock heads and deal in a ruthless manner with opposition of whatever kind.

General Park surviving a number of assassination attempts finally done in by his own people within the ruling clique.

General Park receiving his initial military training and commission from the Japanese Imperial Army and reputed to be an acolyte of the Japanese Colonel Tsuji.

"In April 1940, Park enrolled in the Manchukuo Imperial Army Academy, and on completing his studies with top marks in 1942, was selected for officer training at the Army Staff College in Japan . . . and served during the final stages of World War II. After the war [WW2], he went on to serve in the South Korean military . . . During the Korean War he rejoined the military and became an expert at logistics . . . He rose steadily through the ranks, eventually reaching the rank of general."

The mother of Park Geun Hye having been KILLED during one of those assassination attempts directed at the father!!

Park Geun Hye surely not a person a stranger to controversy. A devoted daughter of her father and NOW Korea, having never married, dedicated to her career.

I fear in an intuitive manner that there is going to be a testing of will here. The North Korean regime is going to TEST President Park in some manner, create an issue and a crisis just to see what the response is? You wait and see. NOT a good thing in a dangerous part of the world.