"Mc Clellan did fortify Washington D.C. to an extent that made Confederate assault cost prohibitive? This fortification was a major undertaking of itself accomplished in an admirable fashion and allowed the Federal government to remain in place and conduct affairs of state unmolested for the entire duration of the war."

Thanks to the British Daily Mail tabloid style Internet web site we have this excellent photo-essay devoted to the fortifications of Washington D.C. as existed during that time of the American Civil War.

"On the front line of American history: Remarkable photos capture life in besieged Washington during the Civil War"

"At the beginning of the war, Washington's sole defense was one old fort built back in 1809. When Major General George B. McClellan assumed command of the Department of the Potomac, he became responsible for the capital's defense. He built fortifications on hills around the city and placed batteries of field artillery like Wiard guns in the gaps between these forts."

Washington D.C. during those years of the American Civil War THE MOST HEAVILY DEFENDED AND FORTIFIED NATIONAL CAPITAL ON THE PLANET!!

A significant and important weapon as part of the defense the Wiard gun? 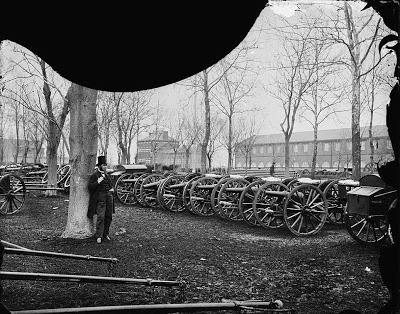 Mobile and able to move to whatever portion of the defense threatened, responsive and agile all the while deadly?

So I would assume.

"The Wiard rifle is a semi-steel light artillery piece invented by Norman Wiard . . . 'although apparently excellent weapons, [they] do not seem to have been very popular'."

"Wiard described two calibers: a six-pounder rifle with a 2.6 inch bore and a twelve-pounder smooth bore with a 3.67 inch bore."

American troops during and ever since the time of the Civil War [Federal units only] noted for being lavishly equipped with the latest and greatest weaponry, lots of it and in abundance.

The latest technology, "killing machines" the industrial capacity of the United States more or less unchallenged.