Thanks to the Voice of America we have some details of the most recent and apparently successful North Korean long-range missile launch.

South Korean naval vessels having plucked from the ocean portions of the first stage, the device as found seeming to suggest a more higher and sophisticated level of missile development and technology available to the North Korean than was deemed possible.

"SEOUL — South Korea is asserting, based on debris it recovered from North Korea's rocket launch this month, that the reclusive state has significantly advanced its ballistic missile technology." 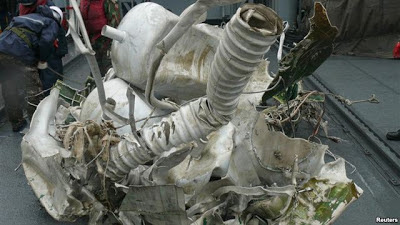 This is the three ton piece of debris as recovered by the South Koreans, space junk came back to earth. NOTE the man for scale in the upper left hand corner.

The "Milky Way" a liquid fueled missile of the old school and using RED FUMING NITRIC ACID AS AN OXIDIZER, very effective and potent EVEN IF ANTIQUATED BY AMERICAN STANDARDS!

"The red fuming nitric acid oxidizer was used by the Soviet Union for its Cold War ballistic missiles, and also, until recent years, by successor Russia to help launch heavier payloads, such as multiple satellites, into orbit."

"This oxidizer . . . can be stored ready to launch for a long time at normal temperatures."

It can be suggested that the "Milky Way" is analogous in many ways to the Soviet Kosmos-3M rocket? Using red fuming nitric acid in that most reliable and widely used Soviet missiles!

"The North Koreans 'corssed a technological threshold that no other nonallied country except China and the Soviet Union have crossed.'"

OH YES! Crossed that line and are not stopping, only moving forward, and in a bad way from the perspective of the South Koreans [ROK] and the U.S.