Thanks to YNet the commander of the Israeli 122 Squadron [IAF] expresses his satisfaction with the mission as accomplished during the year 2012 and hopes for a good New Year.

122 Squadron by admission having participated in the raid that destroyed the Syrian nuclear reactor and more recently the IAF attack on the weapons factory in the Sudan. 122 also referred to as the Nahshon Squadron.

"IAF's Nahshon Squadron, which took part in Syria, Sudan strike according to foreign reports, 'has had a very diverse year,' commander says"

"According to foreign reports, the squadron led the attack on Syria's nuclear reactor and bombed an arms depot in Sudan, and is expected to lead the strike on Iran, should the need for one arise."

"The unit operates a fleet of Gulfstream G550 planes, which are built like business jets but are equipped with advanced Israeli-made surveillance and control technology which allow the them to detect the movement of aircraft from afar." 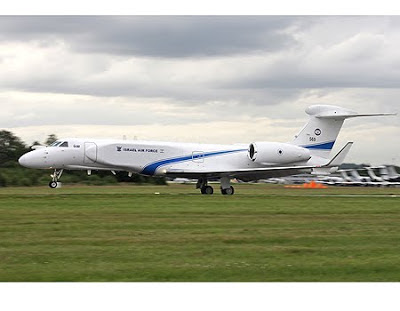 These apparently are a form of AWACS [Airborne Warning and Control System] and signals intelligence aircraft rolled into one!

"The 122 Squadron of the Israeli Air Force, also known as the Nahshon Squadron (former Dakota Squadron), is a G550 squadron . . . Five of these aircraft are used for Airborne Early Warning and Control and three are used for Signals Intelligence.

Israel too [??] having on the ground in Syria and the Sudan both some sort of air force commando/ranger style unit, those troops able to provide exact pinpointing of targets and terminal guidance of precision munitions if and when such weaponry used?