Wingate. The man a continuing topic for discussion and controversial, IN DEATH AS WELL AS LIFE, AND EVEN ALMOST SEVENTY YEARS AFTER HIS PREMATURE  DEMISE!

Wingate of course that most distinguished British army officer from the era of the Second World War [WW2].

Controversial to say the least prior to the war, during the war, and again after the war continuing to this very day!

Wingate generally acknowledged as an unconventional military man, possessing some outstanding leadership skills, an offensive minded combat officer and an advocate of irregular tactics and operations.

During his combat career Wingate:

* Successfully commanded the Jewish Special Night Squads [SNS]. This while serving in  British Mandated Palestine during the Arab Revolt [1936]

* Successfully commanded the Chindits during during the Burmese campaign [CBI theater].

Wingate with three other British companions tragically losing his life during a crash of an American B-25H lighter bomber [1944], the five U.S. crewmen on the warplane perishing as well.

Not until several years subsequent to the end of the war skeletal and fragmented remains of those on board the Mitchell bomber repatriated to the U.S. American and British personnel buried in a single Arlington cemetery grave. That recovery and burial detail using the techniques of the time UNABLE to identify individuals, a single mass grave eventually sufficing for burial. 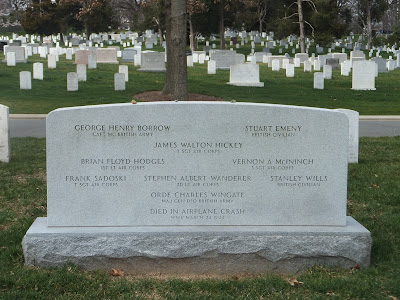 This burial irregular by British standards but in keeping with agreed upon burial repatriation protocol at the time.

That grave site again containing a single casket with a single body bag, scattered fragmentary skeletal remnants of the deceased contained within.

It has been suggested that with the advent of modern techniques for DNA analysis, those remains of Wingate and his compatriots American and British both be exhumed and testing be done for identification. This is do-able?

NOR has the man Wingate been forgotten in other quarters. Salvaged remains of the B-25H bomber having not so many years ago constructed into a monument quite unusual indeed! 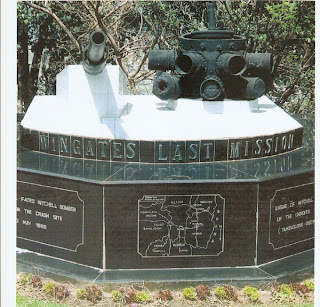 Here is the memorial to Wingate. Located at the headquarters of the Assam Rifles. A portion of the gun barrel from the 75 mm gun as carried by the B-25H bomber. And also a section from the warplanes radial engine. From appearance seems more as a tribute to the American airman rather than dedicated to Wingate.

Exhuming those fragmented skeletal remains for examination by DNA techniques seventy years after the fact is a worthy effort? Wingate again controversial in life and continues to be so even many years after his death? Who would have believed it?