Thanks to RIANovosti we have from today a report of more submarine disaster.

And in keeping with the trend, a nuclear powered submarine while at dock having caught fire, damaged, but NO LOSS OF LIFE, THE VESSEL APPARENTLY INTACT. 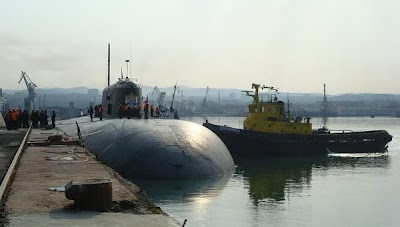 "VLADIVOSTOK, September 16 (RIA Novosti) – A fire that broke out Monday morning on the K-150 Tomsk nuclear-powered submarine, which was undergoing maintenance operations at a dock in Russia’s far eastern Primorye Territory, has been extinguished."
. . . .

"The fire erupted early Monday morning during welding operations on the submarine, when rubber insulation and old paint inside the sub’s main ballast tanks started burning and filled part of the inside compartments with smoke."

The welders torch apparently the culprit, rubber sound-proofing insulation within the Tomsk having been afire, firefighters responding to the blaze successful in their efforts, the warship the remainder of which apparently still seaworthy.

The K-150 Tomsk is an Oscar II class submarine. The same class as the ill-fated Kursk. Those Oscar II having the dedicated mission of attacking American aircraft carrier battle groups.

So many subs recently have gone afoul WHILE AT DOCK carelessness or downright sabotage to blame, the damage severe in some cases and deadly in others. Less danger for a submarine and crew while at sea than while in port?