Most surprisingly so, the ancient and venerable B-57 Canberra continues to fly and even now performing yeoman service in the skies over Afghan.

This story from the Aviationist web site with some of the details. 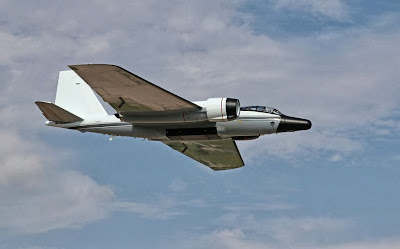 "In Afghanistan these unique aircraft have been used to test Northrop Grumman’s Battlefield Airborne Communications Node (BACN) a technological “gateway” system that allows aircraft with incompatible radio systems and datalinks to transfer information and communicate."

That WB of the WB-57 usually designates "weather". These Canberra now flying for NASA, a civilian agency of the U.S. government. That NASA is participating in military operations, even in a test mode, violates the peaceful and civilian application charter of the agency?

CANBERRA EVEN DURING THE VIETNAM WAR A WARPLANE OUT OF DATE, ANTIQUATED, NOT FELT TO BE SO USEFUL, STILL EMPLOYED IN A TACTICAL AND CLOSE AIR SUPPORT ROLE, THE INVENTORY DEPLETED BY COMBAT ACTION, MUCH AS WAS THE CASE WITH THE F-105!

Canberra best thought of as a light two-engine tactical bomber, the jet version of the B-26? 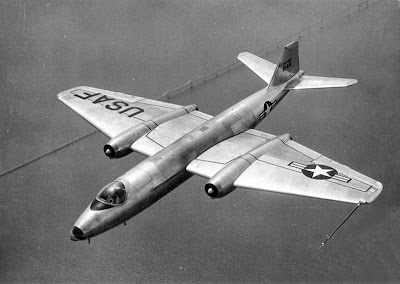 "At the outbreak of the Korean War in 1950, the USAF found itself in dire need of an all-weather interdiction aircraft."

Among the new aircraft considered by the USAF for adoption as a tactical bomber was:

And this as of 1951, that initial version of the Canberra already flying and in service [?] with the RAF, so that means the plane designed and prototypes having flown BEFORE that date!

"The Martin B-57 Canberra is a United States-built, twin jet engine tactical bomber and reconnaissance aircraft that entered service with the United States Air Force (USAF) in 1953."

After sixty years only three of these warplanes still taking to the air, but mission ready and will be so for perhaps many decades to come!