During that era of the Second World War [WW2] the Soviet soldier instantaneously recognizable at a distance, even to the most casual of observers, the Soviet troop characteristically either wearing his issued greatcoat or carrying same as a bedroll AT ALL TIMES.

And WOE to that Soviet soldier that would either lose or misplace his great coat. Probably the punishment a severe sentence of military penal servitude of a very harsh nature! 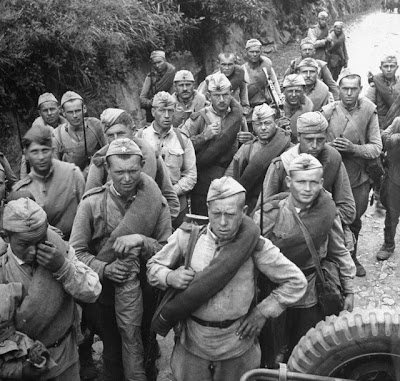 Soviet troops on the march, October 1945, Korea. That bedroll the folded greatcoat tied at the bottom and worn across the left shoulder cross-body style. The soldier in an unimpeded manner able to fire his rifle from the right shoulder as taught!

That military greatcoat folded as a bedroll referred to as a "skatka".

Thanks to the Soviet/Russian military re-enactor web site "13th Guards Rifle Division "Poltavaskaya" we have those exact instruction on how to fold and tie the greatcoat as to be worn as the cross-body bedroll! [scroll down to # 4] .
That Red Army troop required to sleep on the open ground wearing his greatcoat, NO sleeping bag either issued or thought to be even necessary.

That same soldier while on the offensive and moving forward to the greatest degree possible told to forage for himself if possible, otherwise GO HUNGRY!

Make yourself self-sufficient or DO WITHOUT!

NO ONE ever said being a soldier in the Soviet/Russian or even the Czarist army before that was ever easy!

I heard this from the author directly when I met him and had dinner or read it in his book, the The Education of Lev Navrozov-A Life in the Closed World Once Called Russia:
"The only thing issued to a recruit by the Soviet Army was a SPOON."

I found a site several weeks ago, I sadly know not where, which said (I was looking for info on greatcoats) that Russians recruits in WWII were told to bring a spoon from home. Some kept their spoon in their boot.
My dad was in the 216th AAA Gun Battalion in North Africa, Sicily, Anzio, Italy, Southern France, and Germany. He once told me that while in Italy, and on the move, their cots were dumped in a field in the snow. They slept in their wool sleeping bags on the cots (arty hath its perks!). Some of the boys just took off their boots and put them in the snow under the cots. Dad said he put his boots in his bag. The boots placed in the snow had to be heated over gasoline fires to get them on the next morning. I got the impression that they usually slept under blankets on their cots in a squad tent. Sure beats the PBI, of which I was a part in Vietnam. Anywho, that Russian in WWII was one tough cookie.