Thanks to Google books and the original entries from Popular Science, as reported from decades ago now, the Christie suspension, as demonstrated by the man [J. Walter Christie] himself. Innovative designs which made the military tank a do-able battlefield weapon. 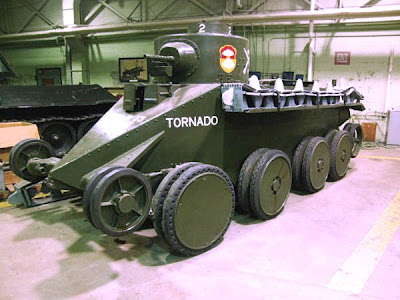 [160 kilometers per hour to be exact] 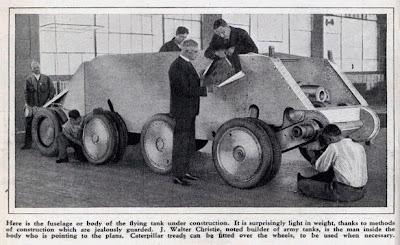 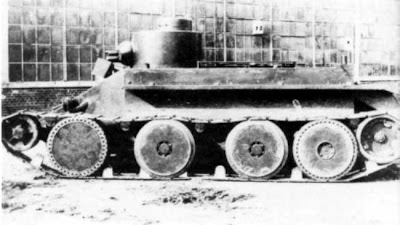 During the Great War [WW1] the tank as deployed at that time was a contraption, a gadget, a mechanical apparatus, a curiosity and oddity of dubious utility? Subject to such breakdown that a mechanic was assigned to each crew, accompanying the tank during a mission, that mechanic merely along for the ride to maintain the engine in good working order!!

From a contingent of tanks during the era of WW1 attempting to cross and expanse of no-mans-land, ONLY ABOUT ONE-THIRD THE NUMBER WOULD MAKE THE JOURNEY AND GET TO GRIPS WITH THE ENEMY WITHOUT HAVING A MECHANICAL BREAKDOWN OF SOME SORT!!

Those tanks of Christie also able to shed the tracks and operate solely on the road wheels as deemed feasible.

This feature incorporated into the Soviet tanks of the 1930's [the BT series of tanks for instance] and IS AN ELEMENT ESSENTIAL TO THE M-DAY/ICEBREAKER THESIS OF VICTOR SUVOROV [the Soviet defector and writer Vladimir Rezun]! If and when Stalin had given the go-ahead signal to the Red Army, the attack on Nazi Germany and subsequently the rest of Europe, those BT tanks able to "shed" tracks, operate on road wheels alone, offensive military action forward greatly facilitated.

November 1939 the Soviet Union had 29,777 tanks in use.
1940 France had 4,111 tanks whose main shortcoming was a little crew, as well as speed. Wagons were otherwise good and functional.
Combat troops were in use 3,400 tanks.
England was in france 310 tanks.
When Germany attacked the French, they had the tanks to the front in 2445.
When Germany attacked the Soviet Union in 3700, Germany had the front tanks.
The Soviet Union was faced with about 24,000 of these tanks.
Usa of 1940 was only 464 armor which 7 were christie wagons.
The rest of the main M1 and M2 tanks.