For shame! This is as it was back in the days of the old Soviet Union!

Thanks to Dee for the tip and the story as covered by the Wall Street Journal.

Russian machinations of an unseemly kind.

"Two Russian monitoring stations designed to detect nuclear radiation went silent soon after the explosion at a missile test site this month, spurring concerns among observers that the Russian government is trying to restrict evidence of the accident." 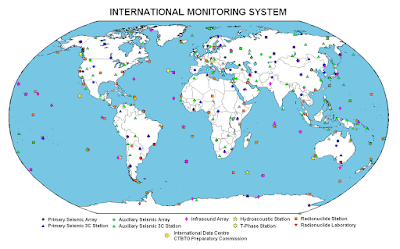 Map of the world-wide nuclear detonation monitoring system. Click on image to see an enlarged view. Also read about the means and methods used to detect nuclear weapons tests and detonations.

Russian missile failure not an atomic event as ordinarily understood. Not a fissionable explosion. Rather a spew of nuclear particles as released into the atmosphere but not the big atomic "bang".