Who needs a man when you can get a robot. Mr. Robot at the controls.

Once more thanks to the tip from Dee and the story as seen at the Internet web site New Atlas the article by David Szondy.

DRONES CURRENT UNMANNED WILL NOT BE "MANNED". BUT ONLY FIGURATIVELY SO!

"A new US Air Force kit that can turn a conventional aircraft into a robotic one has completed its maiden flight. Developed by the Air Force Research Laboratory (AFRL) and DZYNE Technologies Incorporated as part of the Robotic Pilot Unmanned Conversion Program, the ROBOpilot made its first two-hour flight on August 9 at the Dugway Proving Ground in Utah after being installed in a 1968 Cessna 206 small aircraft." 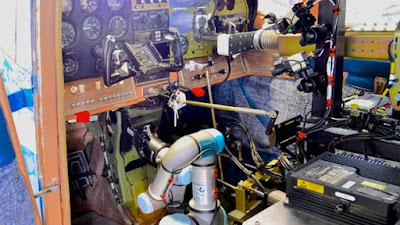 This particular image shows the laboratory contraption and not the unit as was installed in the Cessna 206?

Next step logically to install in a drone and combine with Artificial Intelligence [AI] and you are ready to go. Make sure provisions are included to shut the damn thing down if it turns on you Skynet style.