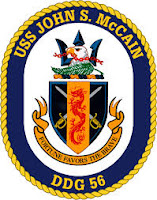 "The USS John S. McCain had been fitted with an 'Integrated Bridge and Navigation System' — with touchscreens controls and displays."

"Complexities of the interfaces led to the McCain's helmsmen struggling to manage helm and propulsion."

"The destroyer took its fateful course directly into the path of the Alnic MC [commercial tanker] after the port throttle was mistakenly operated on its own."

"This served to translate an intended reduction in speed into a turn."

RESULTING IN HORRIFIC COLLISION! NEARLY FATAL! COMPLEXITIES. BACK TO THE OLD WAYS! OUT WITH THE NEW AND IN WITH THE OLD!

"The U.S. Navy is knocking certain technologies down a peg in their fleet of warships, following a deadly collision in 2017."

"Guided-missile destroyers will soon have touchscreen throttle controls replaced with mechanical ones, giving less room for hardware failure in scenarios such as the 2017 collision of the USS John S. McCain and a Liberian oil tanker."

COLLISION DUE TO ERROR WITH THE TWO TOUCH-SCREEN DIGITAL CONTROLS? HELM [DIRECTION] AND THROTTLE [SPEED] INADVERTENTLY SWITCHED IN A MANNER TO CAUSE CONFUSION? THAT IS WHAT THIS WAS. THE SOLUTION BACK TO MECHANICAL CONTROLS.

Doesn't give you a whole lot of confidence. But was not remote hacking as thought might have been the case? A foreign power hostile to the United States did not intrude into the electronics of the ship? Let us hope it was not so.