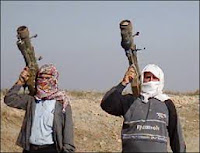 As seen at Freeper and the original article from the Daily Mail MANPAD attack directed against civilian airliner flying over the Sinai HAS OCCURRED! TWO MONTHS PRIOR TO THE CRASH OF THE METROJET A321.

"- The Thomson flight from London Stansted only took evasive action - The pilot had spotted the missile speeding through the air - Holidaymakers were not told they had been seconds from disaster - It was just two months before a Metrojet plane crash in Sinai, killing 224"

"A British plane carrying 189 passengers came within 1,000 ft of a rocket as it approached Sharm El Sheikh, it emerged last night."

"The Thomson flight from London Stansted only took evasive action after the pilot spotted the missile speeding through the air."

"The jet landed safely, and holidaymakers were not told they had been seconds from disaster."

"The Department for Transport confirmed the incident took place on August 23 - just two months before a Metrojet plane crashed in central Sinai, killing all 224 on board."

ON this particular occasion the pilot of the "Thomson flight" having the presence of mind, knowing how to respond, taking appropriate evasive action and averting catastrophe. Well done.

Those persons and flight crew of the Metrojet did not even have such a chance!!