"I can find no instances where 128mm ammo. was sabotaged resulting in ruptured barrels and/or injury to the crew. To counter sabotage, War Armaments Minister Albert Speer implemented a final quality control procedure in which the piece was thoroughly inspected. Further, the penalty for any person engaging in sabotage was hanging."

That allegation ammunition used in the German 128 mm FLAK gun was sabotaged by impressed laborers!

It should be well understood the allied secret services during the Second World War were very interested in sabotaging the German munitions industry in whatever way possible.

Indeed that question of using impressed labor [forced labor] always questionable in my mind. What sort of quality could you expect from such an industrial system using workers whose loyalty was greatly suspect?

Impressed [forced] labor manufacturing V-1 and V-2 missiles, and in addition Me-262 jet fighters. State-of-the-art technology of which quality control HAD to be a major issue. 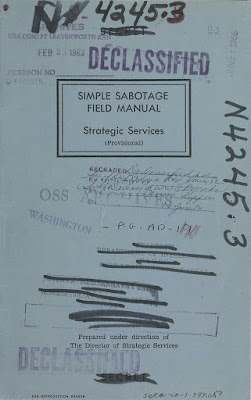 "In 1944, World War II was in its final throes. Though the Allies were holding their own against the Axis, they were in need of more troops and more local cooperation. The Office of Strategic Services (OSS), a precursor to the CIA, envisioned a special kind of special forces–an army of dissatisfied European citizens, waging war on existing governments simply by doing their jobs badly. They wrote up the Simple Sabotage Field Manual, a kind of ultimate un-training manual, which was full of ideas for motivating and inspiring locals to make things harder on their governments."

"Motivating and inspiring locals" I don't think the "locals" would have needed a whole lot of motivation or inspiration at that period of the war [1944]. Especially those impressed and forced labor working under harsh conditions! Speer and his quality control inspections able to mitigate however damage even slight?