"That is a Frogfoot on take-off? Su-25 not normally associated with naval aviation. Until now?

"A twin-seat carrier-based combat trainer powered by two R-95Sh turbojet engines each producing 4,100-kgf thrust. The Su-25UTG is a derivative of the Su-25UB combat trainer version of the baseline Su-25 attack aircraft. It differs from the Su-25UB in having the arrestor hook for practising flying off and on the deck of the aircraft carrier as well as a somewhat lighter airframe due to the fact that its weaponry and armour plates were dismounted . . . The Su-25UTG is operated by the composite air division deployed on the Admiral Kuznetsov aircraft carrier. In 1999, one of the aircraft was fitted with a folding wing." 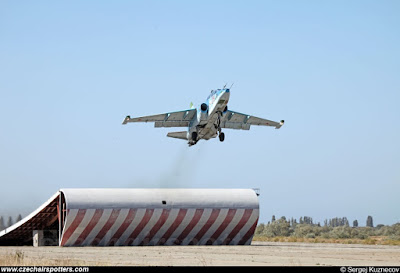 Another image of a Russian Su-25UTB practicing a ski-jump take-off. 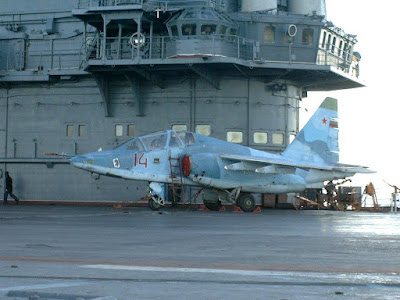 Frogfoot UTG on the deck of an aircraft carrier. Presumably the Admiral Kuznetsov. 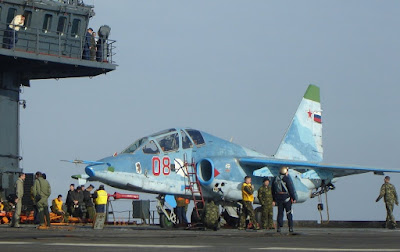 Yet one more image of Su-25UTG ready for carrier flight ops.

Su-25 Frogfoot then an inventoried Russian naval aviation warplane but only in a training capacity.