To war with RUSSIAN CARRIER PIGEONS.

Thanks to  MARCO POLO through Harry:

"The Russians say that they have begun training their carrier pilots at the old simulated carrier ski jump facility in Crimea. The Russians call it 'NITKA'. It is in the Crimean village of Novofedrovka, and was in disuse after Crimea had seceded from Russia with the independence of Ukraine in 1992.  A Su-27 had flown from there for the first time in 1982." 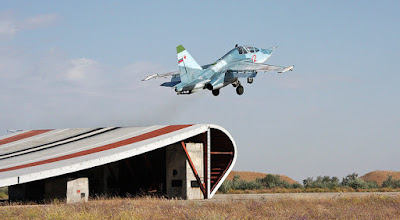 That is a Frogfoot on take-off? Su-25 not normally associated with naval aviation. Until now?

"After the completion of training at NITKA, carrier pilots will return to northern Russia for the training on board the aircraft carrier 'Admiral Kuznetsov'."

This land-based facility for training naval aviators the techniques of aircraft carrier take-off and landings [?]. See from this Russian web site an article about NITKA.

Was LEASED to Russia by Ukraine but is now part of Russian territory and deemed as an integral part of naval aviation training solely under Russian control.

NITKA today, Admiral Kuznetsov tomorrow so goes the adage! I would think.