New wine in the old bottle?

The thought only occurred to me in the aftermath of that prior post PGM Artillery.

Merchantman equipped and armed with naval deck of the five inch [127 mm] size are able to fire a modern round such as the Vulcano? Vulcano 127 mm is backwards compatible with ancient and venerable naval guns? If so, that allows those armed merchantmen to have a more formidable even an envious degree of firepower unexpected. LONG RANGE WITH ALMOST PINPOINT ACCURACY. Survivors of Jutland would have been envious.

That precision guided [IMU+GPS] 127 mm long-range [LR] round as fired by a naval gun courtesy of OTO Melara. The wonders of micro-electronics! An Infra-red [IR] guidance version of this round is also available. 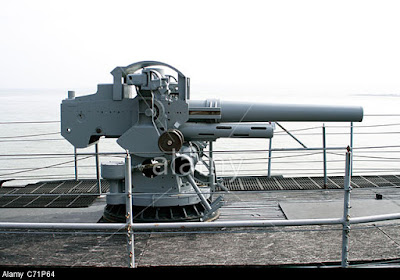 American five-inch [127 mm] naval deck gun as mounted on a World War Two submarine.The Vulcano round is backwards compatible and could be fired from this gun?

"The Italians have very good brains, the brains of great inventors".

Indeed they do and in ways perhaps they themselves might not have imagined possible.