NOW called Suomenlinna. Second largest fortress in all of Europe, only surpassed by Gibralter. 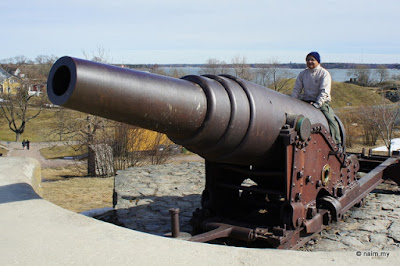 This I believe is an eleven inch [280 mm] Russian 1867 coastal artillery gun. The fortress having quite an assemblage of these weapons. The man astride the gun gives you some sense of scale.

"Suomenlinna, until 1918 Viapori (Finnish), or Sveaborg (Swedish), is an inhabited sea fortress built on six islands . . . and which now forms part of the city of Helsinki, the capital of Finland. Suomenlinna is a UNESCO World Heritage site and popular with tourists and locals, who enjoy it as a picturesque picnic site . . . The Swedish crown commenced the construction of the fortress in 1748 as protection against Russian expansionism . . .  The original plan of the bastion fortress was strongly influenced by the ideas of Vauban, the foremost military engineer of the time, and the principles of Star Fort style of fortification" 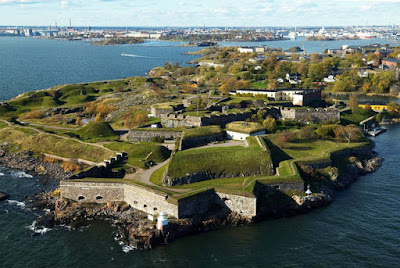 The fortress as seen from the air. Formidable but not impervious to attack and capture! Helsinki as seen in the background.

Let me clarify that village which became the city we now know as Helsinki established prior to the construction of Sveaborg/Suomenlinna but ONLY EXPANDING AND BURGEONING IN SIZE IN THE AFTERMATH OF SVEABORG/SUOMENLINNA  BECOMING A GOING CONCERN!